The Spanish Empire Study Program covers the History of Spain from the Visigoth era, through the Reconquista to the Napoleonic Wars. It also features stories from the Age of Exploration and Revolutionary Eras of Latin America. (400 AD to 1920). 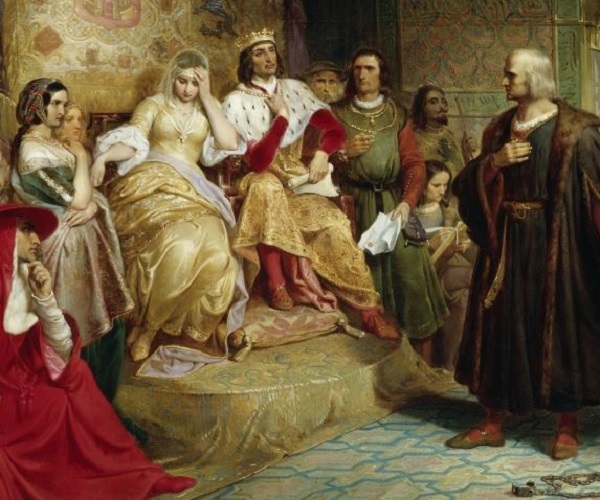 Note: Most histories of Spain are written from a viewpoint that is biased against traditional Spanish institutions. An explanation of the Black Legend and its effects on Spanish history is given HERE.

The following books are recommended as 'core' reading assignments. The complete texts are online, or PDF and EPUB versions can be downloaded.

Spanish History—The first five divisions of the Spanish Empire program cover the history of the Iberian Peninsula from Roman times to the 19th century. These two comprehensive histories cover the essentials of the history of Spain.

Because of the unavoidable Black Legend bias in virtually all Spanish histories, we also suggest reading the Spanish Empire Era Summaries for a somewhat more balanced view.

Latin America—The final three units focus on Histories of Mexico and South America with an emphasis on the age of Revolution in the early 19th century. These books give a good overview of events.

Advanced Students—In addition to the histories listed above, the Spanish Empire Library includes some excellent books of general interest, many dealing with Spanish and Portuguese exploration. Several that are likely to interest a broad range of readers are listed below. All are action packed and full of fascinating historical details.

Spanish Exploration—Spanish Exploration is one of the most interesting, but under-studied periods of world history. Fortunately the Spanish Empire Library features two outstanding series — by Frederick Ober and George Towle — that cover the adventures of Columbus, Balboa, Cortez, Magellan and many more. These series feature some of the greatest adventure stories ever told, and give terrific insights into the lives of the natives as well as the explorers. Just a few of these wonderful books are listed below. There are 16 titles in all.

Study Aids are provided to help students review important characters and events. Some resources relate to the entire program and others to specific historical eras.

The Spanish Empire History Quest program includes over 600 multiple choice questions, divided into eight subcategories. Questions are based on the Spanish history Reading Recommendations listed above, but the program can used with other traditional curriculums.

Students who have never studied Spanish Empire should complete the assigned reading and focus on earning "Knowledge Medals". Players who already have some knowledge of Spanish history can play "History Quest" by answering progressively more difficult questions across all eight divisions.

Advanced players can also compete with other history lovers by posting their scores on the Spanish Empire Leaderboard.

The History Quest quiz game is now available from the Google Play Store, and also the Microsoft Windows Store. It will be released for Apple devices in 2021.

Each of the Spanish Empire Q/A worksheets listed below includes at least 20 questions (out of 50-90 per unit) taken from the History Quest app. Answering written questions helps reinforce information learned through reading and review.

Homeschoolers or others who are studying Spanish Empire can use the written worksheets along with the History Quest quiz game to help them demonstrate mastery in each division. 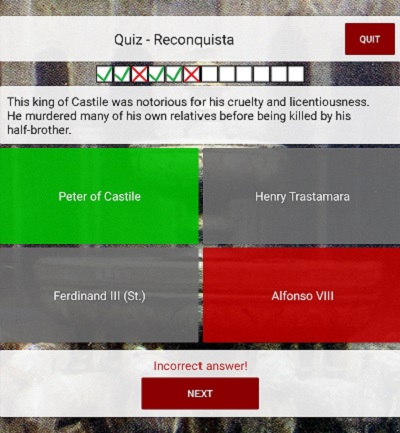 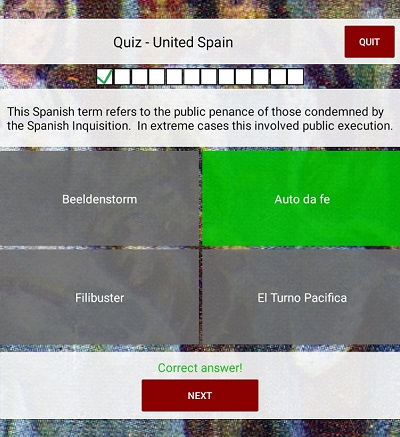 Historical Bias and the Black Legend

In spite of the historic achievements of the Spaniards, many histories of Spain, especially those written in English, suffer from anti-Spanish or anti-Catholic biases and distortions. From the age of the Reformation, the interests of Spain were largely in conflict with those of the rulers of English so when entrusted to the pens of Semitic or British writers, the story of Spain and its dominions does not fare well. According to Wikipedia, the "Black Legend" refers to:

"A style of historical writing that demonizes the Spanish Empire in a politically motivated attempt to morally disqualify Spain and its people, and to incite animosity against Spanish rule. The Black Legend particularly exaggerates the treatment of the indigenous subjects in the territories of the Spanish Empire and non-Catholics in its European territories."

This summarizes the tone of much historical writing on the subject of Spain and Latin America. The anti-Spanish bias is evident when covering topics such as the Catholic Church and the Spanish Inquisition, but at least it is fairly obvious. More subtle and therefore more misleading is its bias in favor of liberal Republican government over traditional monarchy. The Revolutionary governments imposed on Spaniards in both Spain and Latin American were exceedingly corrupt and deeply unpopular, and were authoritarian rather than democratic. Yet in most Spanish histories the overthrow of the legitimate government and confiscation of Church and community property is hailed as 'liberation'. The corrupt secret societies and oligarchies behind 'revolutionary' movements are never disclosed and the motives of 'patriots' are never questioned. 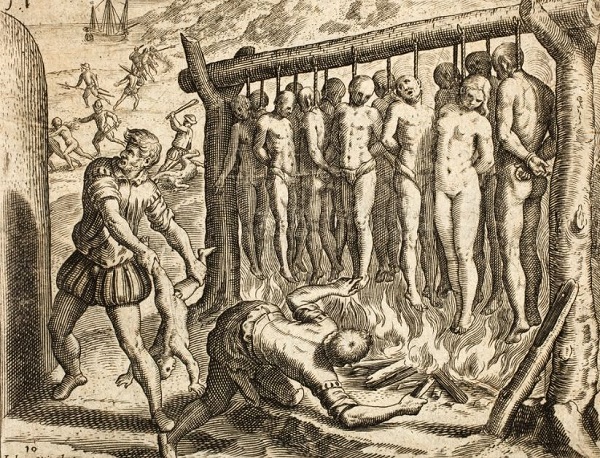 The Protestant Reformation occurred in England at a time when the forces opposed to the Catholic Church were nationalistic, but still strongly Christian. The forces opposed to the Church in the 19th century, however, were atheistic and in virtually all cases controlled by secret societies and criminal cabals. In truth, most of the 'Liberal Republicans' in Spanish dominions sought only to plunder the Church and private property, and cared nothing for 'religious liberty'.

It is difficult for liberty-loving Anglo-Saxons, committed to religious freedom and constitutional, republican forms of government, to see the problems of undermining a traditional Christian monarchy with an atheistic regime controlled by secret societies and criminal elements. So English writers tend to support the fine words and liberal promises of Spanish republicans in spite of centuries of horrid corruption and abuse. When reading stories of the liberal 'Patriots' of 19th century Spain and Latin America, keep these distortions in mind.

Read the study page on Causes of Political Unrest in Mexico for more information about the criminal cartels behind 'Mexican Independence'.