The Christian Europe Study Program covers the histories of France, Italy and Germany from the Kingdom of the Franks to the Reformation. The first half of the program focuses primarily on France. Later units cover the Holy Roman Empire, the Church, and cultural aspects of European history. (500 to 1650). 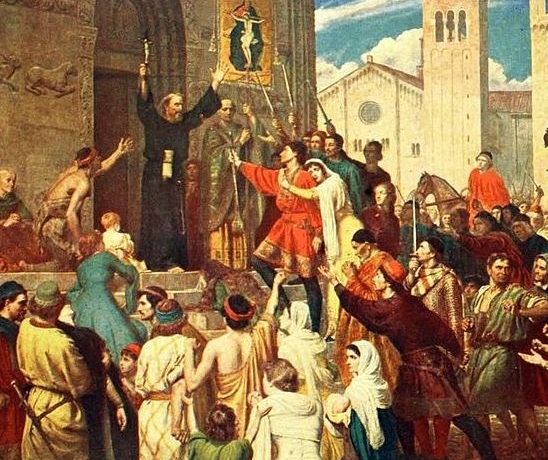 Note: The Heritage Classical Curriculum introduces medieval history by focusing on one country at a time, rather than covering all of Europe chronologically. A more detailed discussion of this traditional approach to history can be found HERE.

The following books are recommended as 'core' reading assignments for Christian Europe. The complete texts are online, or PDF and EPUB versions can be downloaded.

France—The first four units of the Christian Europe program cover France from the Merovingian kings to the Court of Louis XIV. The second unit focuses on the Normans and covers not only the Normans of France, but also Norman conquests in Italy, Sicily, and the Holy Lands.

Christian Culture—Unit eight focuses on some of the cultural aspects of the Middle Ages including Feudalism, Guilds, Chivalry, Castles, Monasteris, Art, and Architecture.

Advanced Students—There a great many books of interest in the Christian Europe collection, but the great majority were intended for intermediate readers. The only two advanced biographies are the lives of the Bourbon kings Henry IV and Louis XIV. Both are worthwhile, but the most enjoyable selections for advanced readers might be Charles Morris's Historical Tales.

Study Aids are provided to help students review important characters and events. Some resources relate to all of European history and others to specific historical eras.

Students who have never studied Christian Europe before should complete the assigned reading and focus on earning "Knowledge Medals" in at least five subcategories. Players who already have some knowledge of French and German history can play "History Quest" by answer questions across all sevem divisions. Advanced players can also compete with other history lovers by posting their scores on the Christian Europe .

The History Quest quiz game is now available from the Google Play Store, and also the Microsoft WIndows Store. It will be released for Apple devices in 2021.

Each of the Christian Europe Q/A worksheets listed below includes 24 questions (out of 60-80 per unit) taken from the History Quest app. Answering written questions helps reinforce information learned through reading and review.

Homeschoolers or others who are studying Christian Europe can use the written worksheets along with the History Quest quiz game to help them demonstrate mastery in each division.

The Christian Europe study Program covers twelve centuries of European history, from the fall of the Roman empire to the 17th century. During most of this period, Western Europe was a diverse collection of states and principalites with differing languages, laws, customs, and histories. Yet all were ruled by Christian princes and all of European culture was influenced by a Christian worldview.

Most contemporary history textbooks cover the major events of Medieval history chronologically with plenty of commentary, but only a superficial look at national histories. The Heritage Classical Curriculum takes a more traditional approach, and focuses on the histories of individual nations so students get a closer look at the unique culture and character of specific nations. The histories of medieval England and Spain, for example, are told in the British Middle Ages and Spanish Empire programs, respectively.

The Christian Europe program, therefore, focuses mainly the diverse civilizations that arose from the Frankish Empire. These include principalities that now compose modern France, Germany, Netherlands, and Italy. Of these nations, France is of greatest importance so the history of France is introduced in some detail. This approach engages student interest and limits the scope of European history enough for students to gain a real appreciation of the subject, and to see conflicts and events from various points of view.